The Creed of Kinship 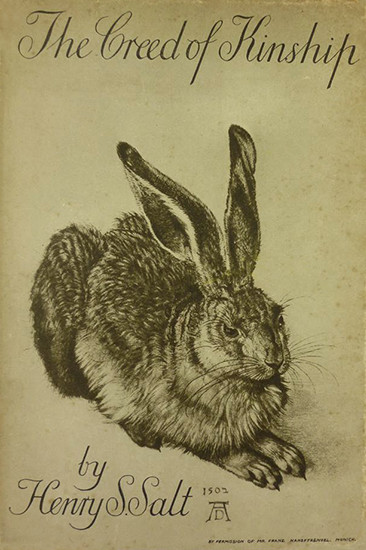 A synthesis of his whole creed as a rebel and reformer, which might be expressed as the gospel of kinship. It is at once a challenge to existing conventional standards, and a defence of heterodox belief. He feels that no partial or one-sided attack upon cruelty, ignorance and superstition is sufficient, but that the true reformer must attack on all side and harmonise his beliefs into a coherent whole.

Brief, clear overview of humanitarian, based on kinship view of evolved life forms, with consideration of war, poverty, women's rights, prison reform, theory of punishment, flogging, animal rights, experiments on animals, vegetarianism, hunting, fishing. Shows Salt's humanitarian vitally concerned with both humans and animals, human rights and animal rights. This vital, wise and courageous book should prove of great interest at the present time, when men's thoughts are turned towards the criticism of existing institutions.

John o' London's Weekly: "With a persuasive simplicity fortified by irrefragable logic, Mr. Salt, the octogenarian founder of the Humanitarian Society, expounds his views on social injustice, the treatment of criminals, war, vivisection, diet, and man's relationship with the lower animals."

Daily Herald: "One of the kindliest men living, Henry S. Salt, put his philosophy on paper.
"In this quiet, wise book, his is a voice worth listening to"