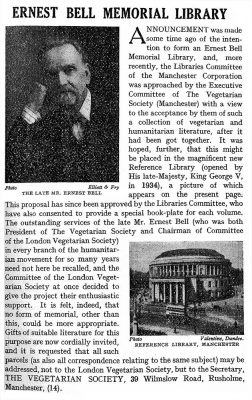 In 1934 Henry Salt suggested the establishment of the Ernest Bell Memorial Library as a fitting memorial to his close friend. In this Library the literature of vegetarianism and all the other humanitarian movements in which Mr. Bell was so deeply interested would be collected and made available. In 1936 it was announced that “The Executive of The Vegetarian Society have undertaken the establishment of a Humanitarian Library as a Memorial to the late Ernest Bell, President, Treasure, Secretary, or otherwise an active worker for, and generous supporter of numerous humanitarian societies.”

The collection was to be housed in the Manchester Reference Library (Manchester Central Library). Appeals for books and journals appeared in both the Vegetarian Messenger and the Vegetarian News.

WE give below copies of two letters in support of a proposed Ernest Bell Library Memorial. A representative committee will be formed to carry through the project and, in the meantime, the honorary secretary would be glad to receive promises of support:- Mr. Henry B. Amos, 6 King’s Park Road, Bournemouth.

Reference is made to the proposal in our opening pages.

From the letters that have reached us, I have little doubt that the proposal for the establishment of an Ernest Bell Library, which would specialize in humanitarian and progressive literature, and so form a sort of centre for students, will meet with a wide response.

I would now suggest that it would be a most helpful step if individuals who favour this idea would lend their names to strengthen the appeal that will have to be made to some Public Institution for the use of a room, and if Societies and Journals would also express their agreement.

Such a Memorial would be so personally suitable, in view of Mr. Bell’s many and long continued services, and so valuable to the cause of humane progress in general, that it is difficult to see how any objection could be made to it: the sole question is whether the initial difficulties can be overcome. I trust all friends of the humanitarian cause will lend their aid.

May I venture to write in strong support of Mr. H. S. Salt’s suggestion that an Ernest Bell Library would be by far the most appropriate Memorial to our old friend. If “the true University of our time is a Library of Books,” then such a collection as is proposed would constitute a real Humanitarian College, such as could keep in perpetual memory the vital humane character and activity of Ernest Bell.

In the September 1935 edition of Cruel Sports, it was reported:

Mr. Amos, who has acted as Hon. Secretary of this Project, greatly regrets to have to announce that the proposal to form a Library or Collection of Humanitarian Literature as a Memorial to the late Mr. Ernest Bell has fallen through owing to the difficulty of securing suitable housing accommodation. The project is, therefore, now abandoned.

The newly formed charity The Humanitarian League is systematically building up it’s own Ernest Bell Library (Instagram and Facebook) in cooperation with Happy Cow and other friends. They have assembled over 200 pieces of Ernest Bell’s writings. So far more than 1,500 books, newspapers, magazines, journals, manuscripts, postcards, badges & more have been acquired. Funds are actively being raised to make all of the items available online.