The League for the Prohibition of Cruel Sports

The new League continued the work of the Humanitarian League’s sports department including using their publications. 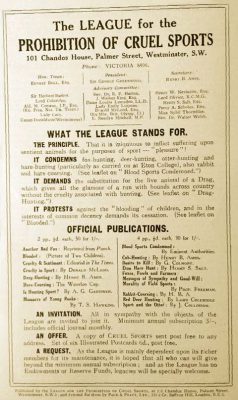 In 1931, Ernest Bell resigned, along with the President, the Hon. Stephen Coleridge, as did his successor, Lady Cory, the same year. In 1932 Ernest Bell co-founded the National Society for the Abolition of Cruel Sports with Coleridge and other dissidents.