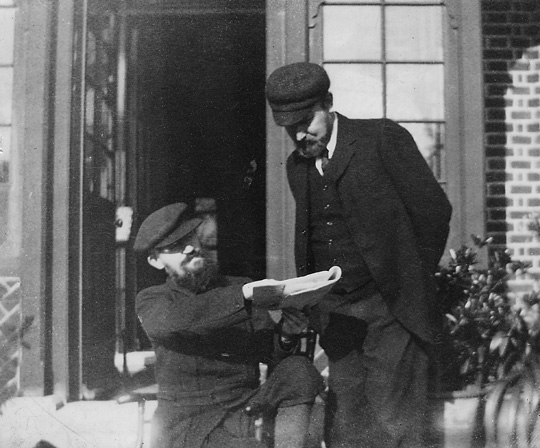 “My pastime has been writing sermons in plays, sermons preaching what Salt practised. Salt was original and in his way unique.” — George Bernard Shaw

This interesting picture (here published by kind permission), showing Mr. Bernard Shaw and Mr. Henry Salt, was taken by an enterprising press-photographer at Hindhead, where Mr. And Mrs. Shaw were staying, after the illness of the former in 1898. “If I remember rightly,” says Mr. Salt, “the editor of the paper for which it was intended did not use the photograph, and gave as a reason that Mr. Shaw’s leg was so thin!” to which statement he adds the enjoinder, “But perhaps that had better be forgotten.” But if it adds degree whatsoever, to the gaiety of nations, why should it be? Mr. Shaw, on his part, we are quite sure, would be the last to complain. Quite possibly, it was in relation, to the same illness that Mr. Shaw himself (as recorded in The Vegetarian of February 3rd, 1900) declared as follows: “My situation is a solemn one. Life is offered to me on condition of eating beafsteaks. My weeping family crowd round me with Bovril and Brand’s Essence. But death is better than cannibalism (not to mention that I would not change my hat, much less my diet, on the evidence.) I know now that I am mortal, which in my Saturday Review-ing days I had come to doubt. My will contains direction for my funeral, which will be followed not by mourning coaches, but by herds of oxen, sheep, swine, flocks of poultry, and a small travelling aquarium of live fish, all wearing white scarves in honour to the man who perished rather than eat his fellow-creatures. It will be, with the single exception of Noah’s Ark, the most remarkable thing of the kind yet seen.” Happily, in 1931, like his friend Mr. Salt also, Mr. Shaw yet continue to survive, “a more or less shining example,” as he wrote to us some time ago, “of what can be done without eating corpses.”