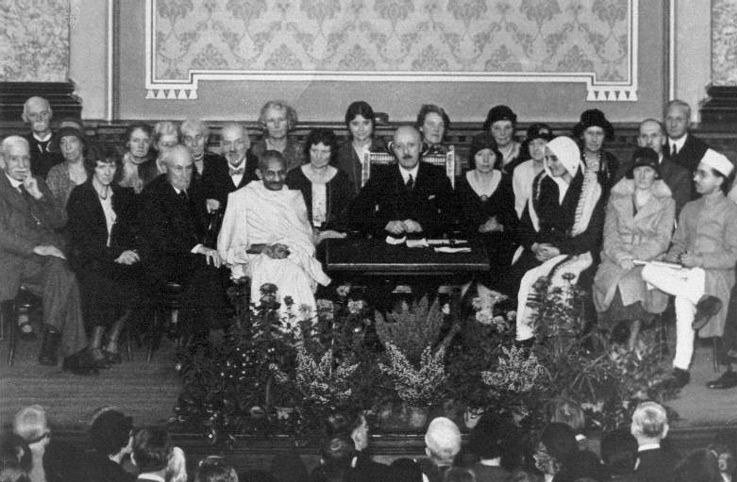 The autumnal social meeting of London Vegetarian Society at Chelsea Town Hall on November 20th was eagerly anticipated as a most notable occasion, mainly on account of the presence, on the same platform, of Mr. Gandhi and Mr. Henry S. Salt. The full significance of the event will be apparent from the quotation from Mr. Gandhi’s autobiography. The meeting must be accounted in all ways an outstanding success, and is likely to remain as an ineffaceable memory for each of the more than five hundred persons present. From the first, every effort was made to ensure that it should be a meeting of those attracted not so much by the fact that Mr. Gandhi is one of the most prominent world-figures at the present time, as by the desire to recall old memories and also to listen to what one of the most eminent vegetarians had to say about his system of diet. Needless to say, of political significance there was none whatever. Nor were those who came by any means disappointed. On the contrary, the speeches made by both of the Society’s principal guests made a deep impression. Never, surely, could the question have been argued upon a higher plane. Nor was the duty of sweet reasonableness ever lost sight of. Mr. Gandhi’s speech is fully reported in the form of a special article this month, and it only remains to say that there was a charming humility and poise, yet withal a passionate sincerity, in the manner of its delivery which made it most engaging to listen to. By general agreement also, the Chairman for the evening, Mr. S. A. Hurren, M.C., F.C.S., hon. treasurer, of the Society and deputy-chairman of its Committee, likewise acquitted himself well, saying just the thing appropriate to the occasion. Introducing Mr. Gandhi, he spoke of him as one who was both fearless and pacific at the same time. They were there to-night, he said, to take a holiday from political ideas, and he wished Mr. Gandhi to feel that he was amongst real friends. Similar consideration in relation to the economy of time led the Chairman to read only one message – that in which the Vegetarian Society (Manchester) desired to join in the welcome to Mr. Gandhi, this message being cordially received by those present.

Following upon Mr. Gandhi’s speech and upon his answer to a question put to him from the audience by Mr. Edwin S. More, came the rare privilege of listening to Mr. Henry S. Salt, whose name and fame as writer and a controversialist–gracefully touched upon by the Chairman in introducing him–need no recommendation to vegetarians and more especially to readers of The Vegetarian News. No such opportunity of hearing Mr. Salt has occurred for many years, and the fact that–now past eighty years of age–he had, for the nonce, allowed himself to be drawn from his retirement gave fresh testimony to the unique character of the occasion. By reason of its rarity, as well as for interest of what was said, Mr Salt’s speech must be reported in full. Mr Salt spoke as follows: “Mr. Chairman, Ladies and Gentlemen, –It is good of you to associate me, in however small a degree, with the visitors to-night, but occasions like this are exceedingly rare for me, for in all my work for the London Vegetarian Society I have always held the principle of not expecting any result. I do not mean to suggest there are no results, or that there has been no progress. Looking back, as I can, for fifty years, I can see what great progress has taken place. (Hear, hear.) It has been interesting to hear Mr. Gandhi’s experience and to compare it with my own experience–the East and the West. Mr. Gandhi was put under a vow by his mother to abstain from meat. My position was different, since my mother was frantic because of my abstinence, and she thought I would perish. (Laughter.)  Really, in the ‘eighties the idea of vegetarianism to some people was more foolish than it might be now. I was master at a great public school, and it was felt a disgrace that any member of the staff should take up what were then thought to be ridiculous notions. I was spoken to by the headmaster himself, who wished to have a word with me on the subject. I waited with some trepidation, and when he did speak to me his first words were, ‘Do you not think animals were sent here as food?’ (Laughter.) No scientific man would say that to-day. (Hear, hear.) Then two doctors at the school, who dosed the boys, also spoke to me, separately and at their own request. It is true that health is not a monopoly of vegetarians, but those doctors went beyond that. One of them said I might live a certain time, and that it was utterly impossible to live any length of time. His last words to me were, ‘I will give you two years.’ The other doctor replied, when I told him I know people who were living that way, ‘Then you may depend on it they eat their meat in the night.’ (Laughter.) Those two years allowed me by the doctor have now become fifty-two, and I ask you to take my word that I have not been reduced to eating meat at night. (Renewed laughter.) One word about the importance of vegetarianism. There are all sorts of campaigns for the protection of animals, the prevention of cruel forms of sport, anti-vivisection, etc. Necessarily, and quite rightly, they should go on separately, but vegetarianism ultimately underlies them all. (Hear, hear.) The animal races must be uncomfortable so long as you eat them. It seems to me something like cannibalism as far as the human race is concerned. It is difficult to maintain perfect love for animals so long as we continue to eat them.” (Hear, hear.)

Both Mr. Gandhi and Mr. Salt were accorded what can only be described as an ovation on leaving the platform, the audience thereafter, for a further hour and a half, betaking themselves to refreshments, conversation and the enjoyment of a programme of music and recitation, in the midst of which the President of the Society, Dr. Bertrand Allinson, was prevailed upon to interpose with an address in which he emphasised the welcome offered by the Society to the visitors present amongst the audience and made appeal for new members.