The Brutalitarian ‘A Journal for the Sane and Strong’ 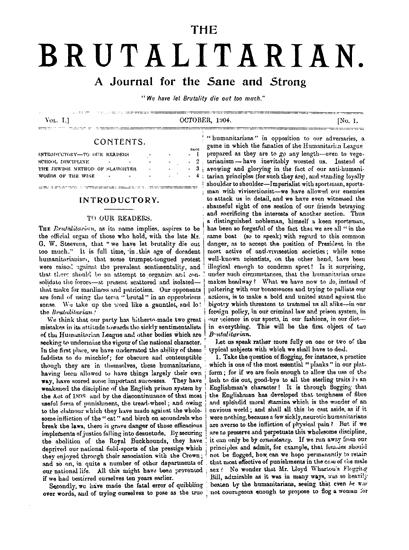 THE Brutalitarian, as its name implies, aspires to be the official organ of those who hold, with the late Mr. G. W. Steevens, that “we have let brutality die out too much.” It is full time, in this age of decadent humanitarianism, that some trumpet-tongued protest were raised against the prevalent sentimentality, and that there should be an attempt to organize and consolidate the forces–at present scattered and isolated–that make for manliness and patriotism. Our opponents are fond of using the term “brutal” in an opprobrious sense. We take up the word like a gauntlet, and lo! the Brutalitarian!

We think that our party has hitherto made two great mistakes in its attitude towards the sickly sentimentalists of the Humanitarian League and other bodies which are seeking to undermine the vigour of the national character. In the first place, we have underrated the ability of these faddists to do mischief; for obscure and contemptible though they are in themselves, these humanitarians, having been allowed to have things largely their own way, have scored some important successes.  They have weakened the discipline of the English prison system by the Act of 1898, and by the discontinuance of that most useful form of punishment, the tread-wheel; and owing to the clamour which they have made against the wholesome infliction of the “cat” and birch on scoundrels who break the laws, there is grave danger of those efficacious implements of justice falling into desuetude. By securing the abolition of the Royal Buckhounds, they have deprived our national field-sports of the prestige which they enjoyed through their association with the Crown; and so on, in quite a number of other departments of our national life. All this might have been prevented if we had bestirred ourselves ten years earlier.

Secondly, we have made the fatal error of quibbling over words, and of trying ourselves to pose as the true "humanitarians” in opposition to our adversaries, a game in which the fanatics of the Humanitarian League, prepared as they are to go any length–even to vegetarianism–have inevitably worsted us. Instead of avowing and glorying in the fact of our anti-humanitarian principles (for such they are), and standing loyally shoulder to shoulder–Imperialist with sportsman, sportsman with vivisectionist–we have allowed our enemies to attack us in detail, and we have even witnessed the shameful sight of one section of our friends betraying and sacrificing the interests of another section. Thus a distinguished nobleman, himself a keen sportsman, has been so forgetful of the fact that we are all “in the same boat” (so to speak) with regard to this common danger, as to accept the position of President in the most active of anti-vivisection societies; while some well-known scientists, on the other hand, have been illogical enough to condemn sport! It is surprising, under such circumstances, that the humanitarian craze makes headway? What we have now to do, instead of paltering with our conscience and trying to palliate our actions, is to make a bold and united stand against the bigotry which threatens to trammel us all alike–in our foreign policy, in our criminal law and prison system, in our science, in our sports, in our fashions, in our diet–in everything. This will be the first object of the Brutalitarian.

Download: The Brutalitarian ‘A Journal for the Sane and Strong’ (pdf)